“The Urgency of Evangelism”

Jesus’ teaching shifted from the disciples in the beginning of the chapter to the Pharisees. The Pharisees were a religious group that had a skewed misunderstanding about money and the blessings of God. The Pharisees loved money and in Chapter 16, Jesus attacked what they love. Lukan theology attacks the “pick yourself up by your bootstraps doctrine” because if you don’t have boots you will not have a bootstrap to pick yourself up.

The Pharisees believed wealth connected them to God and therefore their love for money was as much or even more than their love for God. They studied the book of Deuteronomy and within its contents and other selected scriptures they found a gospel of wealth. They felt justified for living wealthy within a theological framework. Their theology was “Deuteronomic” because the 28th chapter said, “obey God and you will be blessed in war, in the market place, in the field and at home.” Jesus attacked their misinterpreted theology that said the rich are favored and the poor are cursed by God. He attacked a theology that said the rich were justified by not helping the poor. In verse 13, Jesus warned ; You cannot love God and money because you cannot have two masters. Verse 14 says they derided Him; (they turned up their nose at Jesus). They felt no way compelled to help anyone who did not have as much as they had. So Jesus told them this story of two men; “Rich Man, Poor Man!”

There was a certain man that was rich. Jesus does not give his name. We know the rich man as Dives, which is Latin for rich. He dressed well and ate well everyday. He fared sumptuously; which means he ate exotic foods. William Barclay says, “In a country where the common people were fortunate if they ate meat once a week and where they toiled six days a week; Dives is a figure of self-indulgence.”

The poor man’s name is given; Lazarus, which is the Latinized name for Eleazar which means God is my helper. The bible says he was poor. He had some challenges. He was covered with ulcerated sores on top of being poor.

He sat by the rich man’s gate everyday desiring to be fed with the crumbs that fell off the rich man’s table. The dogs licked his sores: In those day, there were no knives, forks or napkins. Food was eaten with the hands and in very wealthy houses; the hands were cleansed by wiping them on hunks of bread, which were thrown away. The rich would literally wash their hands and dry it with the bread. The poor man took Dives’ hand dried bread and ate it. The problem is, he had to beg for it.

(Verse 22) – The beggar died and angels carried the beggar away to the place of the righteous dead. The rich man also died and was buried but verse 23 says in Hell the rich man lifted up his eyes and saw Lazarus in the bosom of Abraham. He was conscious. He was able to see and he was able to feel and he was able to talk. He said, “Father Abraham, have mercy on me, and send Lazarus that he may dip his finger in water and cool my tongue for I am tormented in the flames.” Abraham said, “Son, remember that thou in thy lifetime received good things but Lazarus caught hell. The roles have reversed; now he is comforted, and you are catching hell (my paraphrase). Beside all this, between us and you there is a great gulf fixed. We cant come to you and you cant come to us.”

The man began to pray that Abraham would send Lazarus to his father’s house: “I have five brothers he can testify to so they will not come to this place of torment.” Abraham said, “They have Moses and the prophets; let them hear them.” He said, “No, father Abraham: but if one went unto them from the dead, they will repent.” Abraham said, “If they hear not Moses and the prophets, neither will they be persuaded, though one rose from the dead.”

What do you imagine heaven and hell will be like?

Sure of Eternal Life, 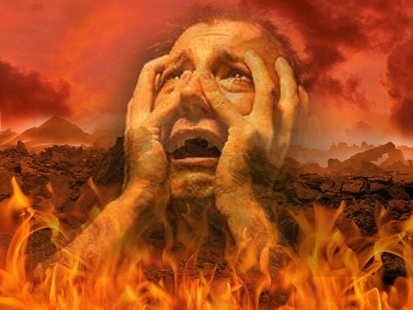